My Visit to Varazdin

In the Croatian Zagorje Region, 77 kms north of Zagreb towards the Hungarian border, the  town of Varazdin is often dismissed as a transit point on the way to and from Budapest, capital of Hungary.

The restored old town fortress from the 12th C today houses the rich collections of the City Museum.

A city of of harmony and intimacy, this is one of my hidden gems…a mini Prague, architecturally a marvel of Baroque style, beautifully restored and maintained. The population here is only 43,000, and this city is well-known as having a strong community spirit, and a love of all things cultural. 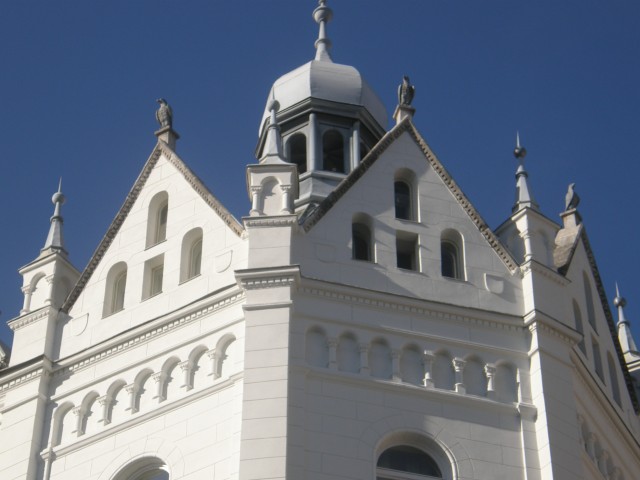 When Croatia was under siege by various empires, Varazdin was a powerful stronghold against the Turks, Venetians and also Napoleon’s army. It became a cultural and major political centre, becoming the capital of Croatia from 1756 to 1776, growing and developing during the European Belle Époque (Beautiful Era) and today the town is a centre for textiles, shoes, handcrafted  furniture, and farming products.

I was fortunate to find one of the remaining tickets for the Vivaldi Concert in the luxurious interior of the Varazdin Cathedral, originally the Jesuit Church, performed by the Italian Baroque String Quartet from Venice. It was an evening of musical splendor that I will never forget, as I was transported into Vivaldi heaven…Four Seasons never sounded so good as here in a setting of gilded gold and chandeliers. The cathedral was built in 1646, bearing the coat of arms of the noble Draskovic Family. 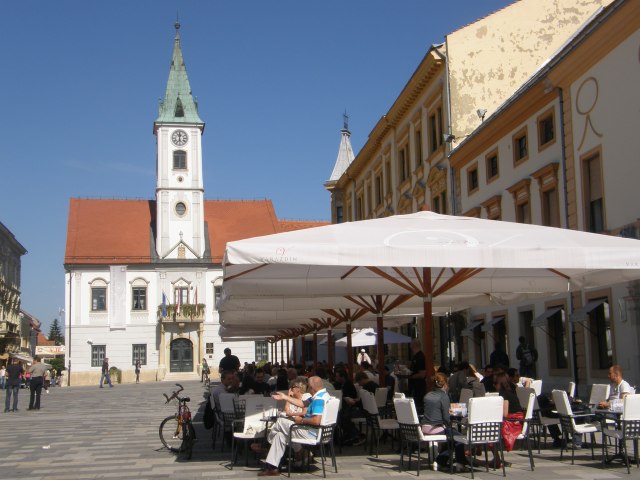 The following day I wandered along the main street of Gundalica, and entered the main square, Trg Kralja Tomislava. A beautiful day, blue skies, coffee shops, market umbrellas, and with the aroma of coffee wafting in the air and the thought of a naughty but luscious cake. I was seduced in this town of gleaming white turrets of the Stari Grad (The Old Town). Sitting in the sun, people watching, sipping my coffee at the famous Coffee House of Grofica Marica (Countess Marica) and enjoying every morsel of the famous ‘Varazdin Cake’  was very satisfying…another day of delicious discovery!

The apple strudel served  warm with a dollop of fresh cream was so yummy…a real treat!

There are a number of art galleries, and museums not to be missed. I really enjoyed a collection of photography by Darko Gorenak entitled, “The Truth about a Period of Time” recounting the realism of the advancing Yugoslav Army upon Varazdin at the beginning of the recent Croatian Homeland War in 1991. The black and white scenes were electrifying and a reminder of how is happened, all recorded through the camera lens. 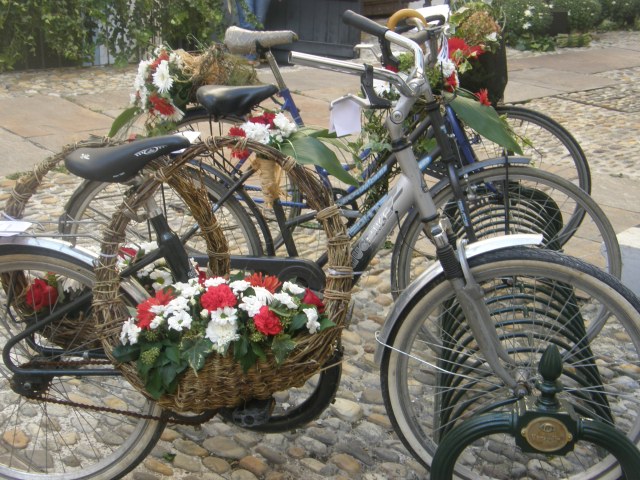 A display of flower art was a highlight of the day at Lisak’s Tower, the only remaining part of the town’s medieval walls. The young girls were so delightful in their medieval costume. 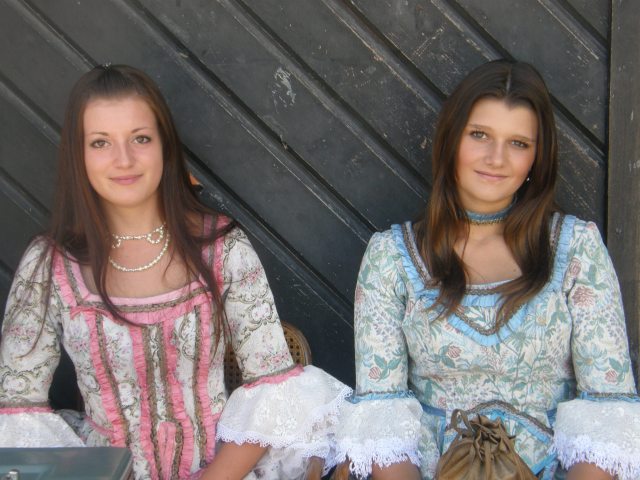 The girls of medieval Varazdin

A very unusual exhibit at the Flower Show……

An unusual collection of flora at the Flower Show

Today, one of the most famous European makers of musical instruments. Master Vladimir Proskurnjak lives and works in Varazdin. Many hundreds of violins, violas, guitars, and tamburitza, which are noted for their exceptionally beautiful and majestic sounds, were crafted in the workshop of this unique “Stradivarius of Varazdin” –See Brochure above.

Before returning to the capital city of Zagreb I decided to have a late lunch at Restaurant Zlatna Guska, (The Golden Goose) a restaurant beautifully designed  resembling days of old and I had heard about their excellence in cuisine…as I entered, I felt warmly welcomed, a lone diner among the many groups of friends and couples. The waiter had a beautiful smile and took great care of me, suggesting a favourite local wine that perfectly complimented my choice of slowly simmered goulash! 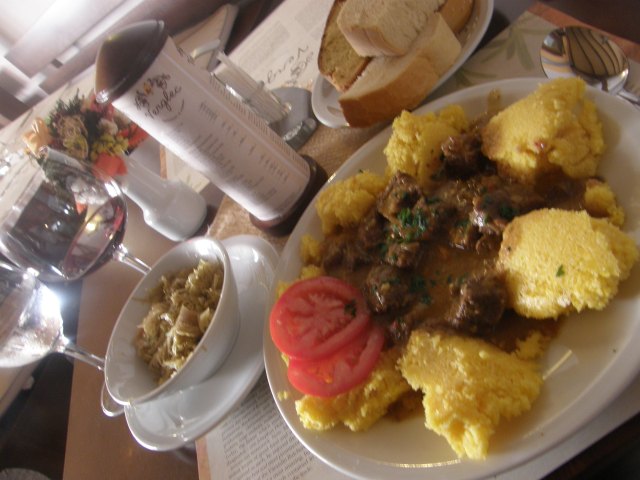 A delicious meal at the Golden Goose Restaurant!

A dish that was so tender and so full of braised flavours, served with plentiful scoops of polenta, rich and very satisfying. Time to hit the road, an hour’s drive back to Zagreb.  Varazdin will remain a wonderful memory, and hopefully I’ll return again one day.

Click on the links below to have a better look at this fascinating part of My Hidden Croatia.